We have developed several hundred algorithms for converting grayscale images to color.  Pseudocoloring schemes are seen everyday in a variety of applications ranging from radar maps to visualizing heat loss from houses.  Often these colorization schemes are haphazard, and no mathematical basis is considered.  It would seem rather obvious that the operator of a pseudocoloring scheme should have at his disposal many different methods for colorization.  By visualizing such schemes within (Schrödinger) color cubes, as seen below, one can begin to understand why particular colorization schemes are better than others.  In addition, through a process call orthonormalization, one color scheme can be converted to many others by employing tensor algebras.

The image that is analyzed next was captured at night during a thunder storm.  There is a very large dynamic range of light intensity that varies from an actual bolt of lightening, to a background of clouds, to structures on the ground - including a church steeple.  This image was captured using a Fuji FinePix S2, whereafter what little color detail was present in the original digital image was flattened to gray by averaging all three RGB channels into one gray channel. 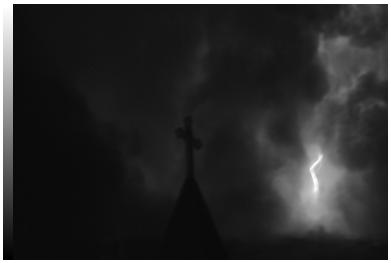 Grayscale image (2.1) with a grayscale bar at left.  The pseudocoloring scheme shown below was originally developed in the Youvan  laboratory at MIT ca. 1990 as a 'hotmap' to colorize images of bacterial colonies taken with a digital imaging spectrophotometer. 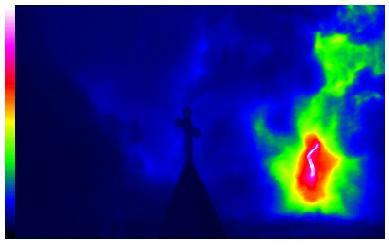 'Hotmapped' pseudocolored image (2.2).  Low grayscale values are mapped to black and blue hues whereas brighter grays are mapped progressively through green, yellow, red, pink, and white as seen in the color cube, below. 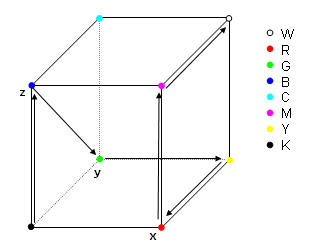